On June 22-24, Innopolis University will hold the Russian Robot Olympiad 2018. This year, young developers will join the competitions for manipulators and mobile intelligent robotic systems for the first time and present their own IRS projects. 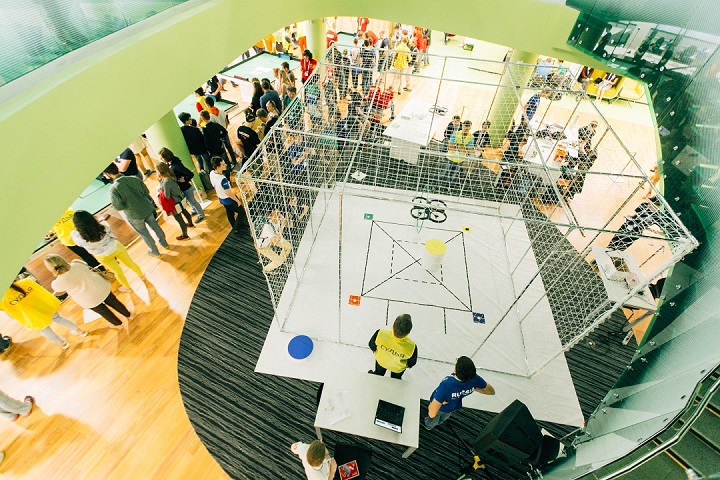 Students involved in the "Manipulating IRS" category will develop an autonomous industrial robot with a manipulator, and program it to sort different types of containers in a logistic centre.

The "Mobile IRS" category is designed for pupils of 9-11 forms and for university students. The task of junior participants is to develop a multi-agent system consisting of two autonomous anti-mine robots and program it to do land navigation, find and dispose a bomb. Senior participants will be challenged with a classic SLAM problem, where a mobile robot has to navigate in an unknown terrain, and create the navigation map to visit the key points and return to the base.

In the "IRS Projects" category pupils of 9-11 forms will compete in the development of projects focused on the problem on the theme suggested by the organizers. The project should consist of hardware and virtual parts and implement the concept of the Internet of Things.

"Food Matters" is the exciting theme for all stages of the WRO 2018. It is associated with the 2nd goal of sustainable development, i.e., development of sustainable agriculture, improving food quality, ensuring food security, and hunger elimination.

For the first time in the history of the Russian Robot Olympiad, it will include workshops where anyone will have a chance to get through a zone of obstacles using robotic off-road vehicles and build a robot and see how it performs tasks in the air or under water. The agenda also will include lectures by representatives of the official partners of the Olympiad, members of the laboratories and the Robotic Centre of Innopolis University.

On June 6, the Russian IT University opened a national competence centre of the National Technologuy Initiative in the field of robotics and mechatronics. The consortium of the centre under the supervision of Innopolis University includes 16 leading universities of Russia, 5 academic institutions of applied research , 7 foreign partners from France, China, Denmark, Sweden, Germany and Norway, and 16 industrial partners, including Moscow Institute of Physics and Technology, ITMO University, Higher School of Economics, Far Eastern Federal University, Institute for Information Transmission Problems and Institute of Machines Science of the Russian Academy of Sciences, "Sberbank", "Gazprom", "Aeroflot", IMT Atlantique (France) and Shenzhen Institutes of Advanced Technology (China). Thus, Innopolis will become a Russian robotics hub.

Alexey Khabibullin, Head of Project-Oriented Olympiads at Innopolis University: "This year the Olympiad will gather the strongest participants, winners of the regional stages of the competition. The Football category attracts much attention due to the FIFA World Cup running in parallel. This year the number of participants in the category of autonomous vehicles and aerial robotic systems has increased showing the growing interest of the young generation to modern robotics issues. At the World Robot Olympiad in 2017 we have raised the ante by winning the third part of all awards. We keep working hard to repeat or even improve this result."