Senior Editor at Nature Physics: "There is no magic trick to getting published in Nature but doing great science is a pre requisite"

Dr. Bart Verberck, Senior Editor at Nature Physics, and Joffrey Planchard, Institutional Partnerships Manager for Europe, told students of Innopolis University what a scientific article should be like to be published in Nature Research and outlined current trends in academic publishing. 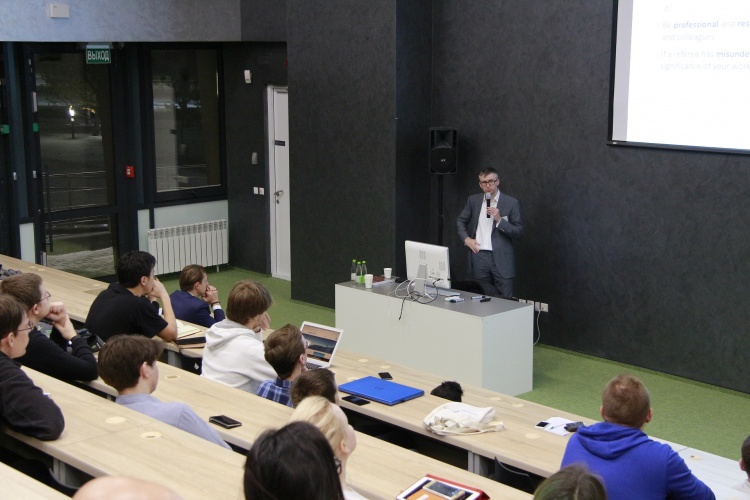 Joffrey Planchard: “…all competition is good for science communication”

Getting published in a good quality journal that reaches the audience you care about is a good start! Competition among authors of scientific works is quite a pressing issue nowadays – there are more papers than ever before and with the advent of very large multidisciplinary journals like our own Scientific Reports, it can be hard to stand out from the crowd. Make your research publication as accessible as possible and keep in mind that clarity and precision are important parts of a good scientific writing. Another approach to consider is that images and/or videos that communicate the key findings are particularly effective in an increasingly social media-driven world. Even if it is not a Nature paper you should be trying to write it. Do it as if it is targeting an audience as broad as Nature’s.

We are very pleased that Nature continues to perform highly and regularly hailed as the leading interdisciplinary journal. All competition is good for science communication. Our own Nature Communications and Scientific Reports are two relatively recently launched open access publications that come to mind but there are many other examples from across the natural sciences such as Physical Review X, Chemical Science and eLife. These publications have established themselves rapidly as having a good reputation and reaching a broad audience.

Bart Verberck: “...in the planning process you can identify what logical gaps there are in your paper”.

There are so many big mistakes you can make! However, one of the most common is the failure to clearly communicate the most novel and important finding in your new work.

People approach writing articles in lots of different ways and there is no definitive right way to approach the task. Having a detailed plan can certainly be extremely helpful because in the planning process you can identify what logical gaps there are in your paper. The planning process implies that you need to do more experiments or analyses to make a complete story for your paper. Therefore, the earlier you start planning the more chance you have of identifying such gaps quickly and ultimately producing a more complete story, well-supported by the data, that editors and peer reviewers can be convinced by.

Find a good mentor, identify important questions to focus on and work hard. There is no magic trick to getting published in Nature but doing great science is a pre requisite. When you are preparing an article to submit to Nature, make sure you read and follow the instructions to authors available on our website.

Bart Verberck: “Every paper is different and it really depends on the complexity of the peer review process, the revision process and so on for your paper”.

Publication period depends on complexity of the revision process and editing. Every Nature paper has received, accepted and published dates on it so it is easy to find out what is typical for your own field. The majority of articles in Nature are published in anything less than a few months after submission. In cases where authors have an urgent need to publish quickly, for example as a result of a competition, editorial and production staff can work together to shorten the period from acceptance to publication, on occasion reducing it to just a few days.

Research collaborations are tending to get bigger. The average number of authors on a paper has been rising in the recent past with major research consortia and centralised facilities making an increasing contribution to high impact science Struggling against this trend is not really appropriate but understanding the importance of collaboration in the modern scientific world is urgent. Nonetheless, there will still always be a role for individuals in small research teams in science. You only have to see the continued primacy of the Nobel Prizes to see how that resonates with people within and beyond the scientific community – we all need our scientific heroes.

Bart Verberck: “Editors ... are focused on doing a good job for readers, authors and the scientific community in that context”.

Senior Editor commented on a statement of Randy Schekman, a winner of 2013 Nobel Prize in Medicine. At the ceremony the scientist claimed that top science journals, including Nature, distort scientific process because the pressure to publish in “luxury” journals encouraged researchers to “cut corners” and pursue trendy fields of science instead of doing more important work According to Randy Schekman, editors of such journals are not active scientists but professionals who favoured studies that were likely to make a splash.

“Professor Schekman is an excellent scientist and a deserving Nobel laureate, and, like anyone, he is entitled to his opinion. We would challenge the implication that professional editors are somehow inherently likely to have a detrimental impact on science. What matters to a scientific author is having an editor that does a fair and good job in managing the peer review process and making decisions. Our team of editors is dedicated and focussed on doing just that. Editors select research for publication in Nature on the basis of scientific significance. Nature has been publishing research using essentially the same criteria for decades: original scientific research, of outstanding scientific importance, which reaches a conclusion of interest to an interdisciplinary readership.

Similarly to Nature, Professor Schekman’s journal eLife, also seeks to publish research. Editors at both journals are focused on doing a good job for readers, authors and the scientific community in that context. Diversity and competition are good for the scientific community and good for science publishing. We anticipate that academic and professional editors will continue to be important contributors to high quality science publications (such as those included in Nature Index) for the foreseeable future”.

Joffrey Planchard: “We need to engage broader society more so they can understand why that is and how we are making progress towards addressing these questions”

Bart Verberck: “Almost any field of human endeavour has its own jargon and “assumed knowledge” that can make communicating to outsiders difficult. The sheer level of detail and complexity in most scientific fields certainly plays a role, but perhaps a bigger issue is that for the majority of scientists communicating about their research only ever requires them to do so to people within their very narrow field.

However, it is true that many scientists are better at obscuring their meaning for lay people than many other fields. In general this is not because scientists want to stay in their ivory tower above the rest of the population…indeed many scientists would be delighted if they felt they could answer the typical dinner-party question of “what do you do?” without confusing the non-scientist that asked it! Without the tools and practice in communicating more broadly it is very hard for scientists to do this easily. And yet it has never been more important to seek to do so: the big questions facing the world can only be addressed by science and technology and we need to engage broader society more so they can understand why that is and how we are making progress towards addressing these questions”.

“Popular communication tools like films, sitcoms, games, books or commixes — all these media have a role to play in the broader communication of science. However, we need greater efforts at all levels to improve the understanding of science and its value. Education at all levels is vital to move us towards a more science-literate general population. Equally, scientists and the organisations that employ them need to continue to make greater efforts in demystifying the work they do.

In the past we have considered initiatives related to release of special editions of Nature Light or Nature Kids and we certainly would not rule it out in the future. However we do already have our sister publications under Scientific American, including the Russian language version V mire nauki. These publications explicitly seek to communicate to a less specialised audience about the latest scientific achievements”.

Bart Verberck: “Scientists must be sure that the reward outweighs the risk”

Science does not operate in an ethical or societal vacuum. It is incumbent upon leaders in the scientific community as well as our society’s leaders to ensure that the big issues that are raised by scientific research are properly discussed and debated. Ultimately, research and applications derived from research should only move forward with societal buy-in. Thus, even if a scientist believes the door has the greatest good hidden behind, if there is a chance it could also hide something bad then we must be sure as a society that the reward outweighs the risk.

According to the recent Nature Index Rising Stars publication, Russia has impressively increased its contribution to the high-quality Nature Index journals, particularly in the life sciences. It seems likely that Russia’s increased investment in university research in the preceding years and an increased focus on achieving world-class university status for Russian higher education institutions have played a role in this dramatic increase. As you can see from Nature Index, Nature itself published 22 articles that had at least one Russia-affiliated author in the most recent 12 months.