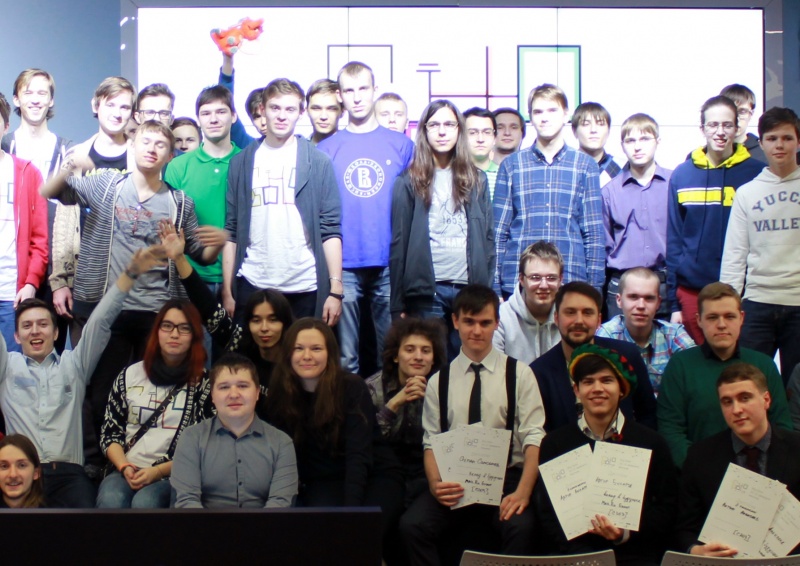 The event that took place in Moscow these days was focused on Big Data, tools and methods used for the large data arrays processing and delivery of results in a human-readable form to be effectively applied in terms of constant data growth.  During 3 days participants of the competition, high-school children and students together with experts in data analysis and sociology were challenged with the task to examine social behaviour of their generation using open data received from VKontakte. Besides, young coders checked numerous theories, tested data sharing tools and mechanisms of interaction in social networks. Based on the competition results, participants developed services and recommendation systems that determine subcultures widely spread in the online media, identify concerns of the audience, define the structure of social interaction and the time that people spend on these social platforms.

Partners of the event, including Innopolis University, gave a number of interesting lectures about data analysis in sociology, physics, industry, Internet of Things, advertising, medicine, etc. In addition, they outlined the value of mathematical calculations behind similar systems and suggested   a list of top educational institutions focused on Big Data for those interested in this area of expertise. The competition was supported by the following partners: #tech, Russian Venture Company, VKontakte, Intel, Data-Centric Alliance, E-class, Microsoft, Mail.ru, Deloitte Anaytics Institute, National Research University Higher School of Economics and etc.

Following the competition results, the team “Technology Madness" consisting of Bulat Maksudov and Ilgiz Mustafin, students of Innopolis University, won in the nomination “Potential Utility” and received a Certificate of Honour.

“At the GoTo competition we had been dealing with information on Moscow teenagers. The team decided to analyze and compare behavior of the children who left school after the 9th form and those who pursued studies. Our efforts resulted into two small sites. The first one predicted whether a person terminated or continued studies with 77% certainty value based on a number of criteria: age, attitude to alcohol and tobacco. The second resource displayed a list of Moscow schools that children leave more frequently. We have done a great job at the competition by learning a new programming language in two days and mastering Data Science tools”, - told Bulat Maksudov, student of Innopolis University, one of the GoTo Hack participants.

“I am pleased that we have had a chance to join the GoTo event. At the competition we created a program to identify whether a child left school after the 9th form based on indirect indicators (ignoring educational institutions). According to these data we have built an interactive map of Moscow schools and made a so-called rating of schools that children leave after the 9th form more frequently. In future we plan to increase the selection of users and create similar ratings for schools in Russia, Ukraine, Republic of Belarus and other countries”, - claimed Ilgiz Mustafin, leader of the team, first-year student of Innopolis University.

“A high level of projects presented by the GoTo finalists came as a pleasant surprise. Despite the fact that these projects are authored by schoolchildren and junior university students, they have a huge potential in terms of practical application. Some of the projects can lay the ground for perspective scientific research. Results of the competition show that our country is rich in motivated young people who feel enthusiastic about IT. We are looking forward to seeing them as students of Innopolis University”, - shared his impressions about the competition Denis Stolyarov, Head of the Enrollment and Admission Office.